The Super Bowl has been one of the events with many memorable moments. One salient moment that grabbed headlines was when PINK performed the National Anthem on stage despite being sick with the flu.

According to a review by Harvard School of Public Health, this year flu outbreak has been particularly severe due to an early start to flu season and the dominance of a very acute flu strain, H2N2.

However, what caught my attention the most is seeing the term “Man Flu”. At first, I thought someone is poking fun but I was surprised by what I found the more I looked into it. Man flu is a supposedly insulting term given or referred to men who have the flu (or simply a cold) but tend to overreact to its symptoms. There’s still some continuing debate as to whether it really exists or not. We’ll present you with two scenarios based on facts and anecdotes, and offer some tips over treating man flu or any flu.

Fact: Man Flu Does Exist and Is Real

Fallacy: Man Flu Does Not Exist and Is Just Used to Gain Attention 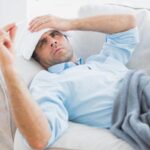 Treatment For Man Flu Or Any Flu